I have been riding and racing single-speeds for a number of years now. I have made podiums on both 26" and 29" single-speeds. Lately work, family and life in general has gotten complicated so I decided to take a break from racing and focus more on just enjoying riding. So, out goes the 18.8lb Niner One9 an in comes the Carver Gnarvester. For those of you unfamiliar, it is basically a Krampus, but the frame is constructed of space age, helium infused, fairy dust sprinkled titanium...rather than the lead that is used for a Krampus frame. This gave me the ability to build a 21.8 pound 29+ bike, quite a difference from the 28-30lb Krampus' running around.

My first ride was fantastic. I carpooled with the retired, super-riding couple, Randy and Karen out Sly Park where we rode Fleming Meadows, then Jenkinson Lake, then Fleming Meadows again (the opposite way). Overall 25+ miles with 3700'+. Not a bad day on a new bike.
The overall performance was just what I was hoping for. But to read about the good and bad, just visit this thread on MTBR where I noted the good and bad.

I have owned many bikes since I fell in love with mountainbiking (here they are in order):
Motobecane Fantom Team (FS), Soul Cycles Hooligan (26" SS) in green, then white, Misfit Dissent (SS), Trek Superfly (SS),Niner One9 (SS), Niner SIR9 (1x9, SS now 1x9 again). Finally, the Carver Gnarvester. I think that the final two bikes will be mainstays in my stable. The SIR9 is just so smooth and versatile and the Gnarvester is just a blast to ride and is a real head turner.

For road bikes, I am set with my Fuji Cross and Motobecane Ti Cross. Yes, my main road bike and mountain bike are both Titanium.

The only way I will change my stable now is if Niner comes out with a new TIT9 (Titanium Is Tremendous)...only that will cause me to give up the Green Machine that I have grown fond of.
So, the SIR9 will be my long distance bike that will get me up major climbs thanks to proper gearing, and the Gnarvester will be my go-to bike for most rides and most trails as it is just plain fun.
I am already looking forward to the next ride. 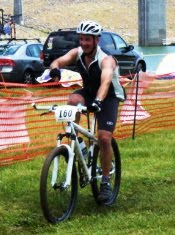 Click the Pic to View "The Good, The Bad & The Ugly" Race Results

Listed below are events I am interested in. Can't do them all, but will likely choose a few. I am going to focus more on just riding and less on races this year, then hit it hard next year. No XC races anymore, just the Endurance stuff (getting too slow).